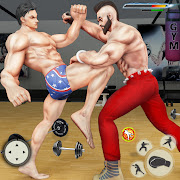 The gym fighting game is one of the combat action games, where you have a fantastic chance to progress from a simple street karate fighter to a gym club leader. It allows you to equip dozens of credible fighting games techniques! You will face an army of undefeatable enemies and challenge powerful bosses as the level goes.

Bring Out your Inner Fighter

Story Mode and Arcade Mode
In addition of story mode, there is an arcade mode. Accept the karate fight challenges of mighty opponents and beat them up in gym fighting games. Fight alongside the power boss of the underworld, gain new powers, and conquer the leader boards. In arcade mode, fight against other kung fu fighters and tough competition. In kung fu fighting games, this mode offers the chance to fight with other players.

Knockout mode
Knockout your rivals with a single hit and win karate fighting games. Use special martial arts moves to avoid your competitors' attacks and fight back with your extreme combo hits.

Smash It Mode
Test your bodybuilding fighting game strength with smash it mode in this offline wrestling game 2022. Break all heavy things with one hit.

New Customized and Powerful Fighters
Make your fighting games club powerful, versatile, and unbeatable to wreck your enemies. Select remarkable characters with unique competencies and ultimate fighting moves in this gym boxing game. Train your fighter so hard and develop his boxing games skills. Customize their power, health, and speed for a better win. Gym wrestling game offers fantastic customization options and gives players more control. It is providing a deeper and more personalized experience than ever before.


New Surprise Mode
The gym fighting game presents a unique mode called GYM Formation. Now you can customize your gym according to your will. Earn coins and buy new equipment for your gym.
Screenshots
Old Mod Versions
Rating & Comment
4.7
992 total
5 701
4 120
3 84
2 30
1 57